Flowers drew me forth
that time when I went out
and the ground beneath my feet
fell away.

I held on to the stems
as the dark pulled me in,
held on as if I clutched
the light of the world in my hand,
not the torn throats
of narcissus blooms.

Through the long night
in the iron earth
I clung to the fickleness
of beauty, the only candle
for the tomb.

“The images are so clear and fresh that they electrify you.”

“These are the poems of a true New Englander; everything inessential has been pared away to reveal the underlying structure of hope and despair that holds the world together.”

“Faye George transforms her pain and hardship into language that lifts us from terror…[she] burnishes sadness until it flames up as beauty. A woman is made new through her own powers of language.”

FAYE GEORGE (1933-2020) published four poetry collections since A Wound On Stone (2001): World of Hard Use (2015), poems of work and workers, showcased on Poetry Daily; the historical sequence, Voices of King Philip’s War (2013), dramatizing the 17th century conflict between the English colonists and the Woodland tribes of southern New England, recipient of N. E. Poetry Club’s Sheila Motton Prize; and the lyric verse collections Back Roads (2003) and Märchenhaft: Like a Fairy Tale (2008). Chapbooks Naming The Place: The Weymouth Poems and Only The Words appeared in 1996 and 1995.

George contributed poetry to The Paris Review, Poetry, and The Poetry Anthology, 1912-2002; the Anthology of Magazine Verse & Yearbook of American Poetry, and numerous literary periodicals and anthologies. Online publications include Agni Online, the Endicott Journal of Mythic Arts, the Cultural Society, Poetry Daily (also included in their 2003 print anthology). She received the Arizona Poetry Society’s Memorial Award, Gretchen Warren Award, and Erika Mumford Prize. Her published works and related papers are archived in The Maxwell Library at Bridgewater State University.

Listen to a selection from A Wound On Stone:

Poems “Kore,” and “Welcome to This House” from George’s Perugia book A Wound on Stone and “Journey” from George’s third book, Marchenhaft (Earthwinds Editions, 2008): 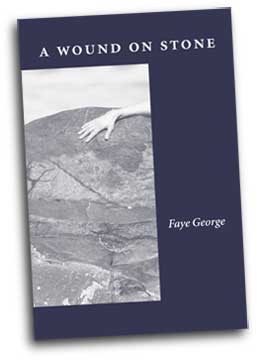